What Causes Two People To Fall In Love With Science

For centuries poets and philosophers have speculated what causes two people to fall in love. Now, Biologist Dawn Maslar M.S. puts an innovative twist on this age-old question. Science can now take the mystery out of love. Thanks to latest neuroscience we can finally explain how your brain falls in love.

In this innovative twist on this age-old question, Dawn Maslar – a science writer and love biologist, – explores the latest neuroscience and explains how your brain falls in love.

Check out her TEDxKC conference by watching the video below or scroll down to read the full transcript.

This is what we know about love:

And in both, their serotonin level drops causing them to be a little more obsessed. Although we know what happens, we don’t know how you get there. There are certain chemical processes that happen, including the tipping point, where you have an increase; and also an enzymatic reaction, where you have a subsequent decrease.

Either of these would fit nicely into that missing section.

So I was pondering this, and I just happened to be on vacation. I was visiting my family, and I have a cousin who is a PhD in biochemistry, so I decided to use the opportunity to pick his brain.

I told him what I knew about love. I said, “Certain neurotransmitters go up, certain ones go down. I think it may be biochemical.” I looked at him, and he gave this expression of, “Plausible.” I said, “Some may have a tipping point reaction.” He said, “Plausible,” or looked plausible. Then, I said, “Others may be enzymatic with a subsequent decrease.” Again, he gave me the facial expression of plausible. He’s not a big talker, so I thought this was going really well.

Before I could formulate my next question, my then 95-year-old grandmother spoke up, and she said, “You, youngsters, don’t know anything about love.” I was shocked, and I said, “Yeah, I know. That’s why we’re talking about this.” She said, “Your problem is you, young girls, jump into bed too quickly. You fall in love, but a boy doesn’t fall in love that way.”

I kind of looked at her, and I said, “OK, let’s talk a little bit more. How does a boy fall in love?” She said, “Back in my day, a girl knew if she wanted a boy to fall in love with her, she couldn’t sleep with him right away.”

Now, I had heard that stuff before: there was things like the three-date rule, there’s the 90-day rule from Steve Harvey’s book, “Act like a lady, think like a man,” but I always thought those were anecdotal. I didn’t think there was any science behind it, so I looked over at my cousin. His face no longer said plausible.

I decided to continue with my grandmother because of the date; the question was the date. I said, “How long do you need to wait before you have sex?” She says, “Ah, you wait to have sex until he falls in love.” “OK. Well, Granny, how do I know when he falls in love?” She says, “Oh, that’s easy, you know he’s in love when he commits.”

I looked over at my cousin, and I was like, “What do you think?” and he hung his head, and he just shook it. He said, “OK, Granny, it’s time to go home.” I realized he was not buying any of this, and my research had to continue on another day.

I returned home, and I hit the research library. The problem is there’s not a lot of research out on how humans fall in love, primarily, because of the way we do research.

Imagine a guy saying, “Oh, I love you.” He falls in love, and a researcher walks up saying, “Congratulations! Can I inject this into your brain to see if it has an effect?” You’re not going to get many volunteers.

So we had to rely on the next best thing: animal studies. But what animals fall in love? Well, we know when humans fall in love, they show exclusiveness to one person, so they started looking at other creatures that mated exclusively.

And they ended up settling on these guys: the monogamous prairie vole. When a prairie vole finds a mate that they’re interested in, they will, basically, mate for life.

So they started looking at the neurotransmitters to see what was going on, and what they discovered was one of the first things that increases is dopamine. And if they block the dopamine, they would lose the loving feeling.

So they thought, “Oh, dopamine,” but they knew there was a problem. Dopamine couldn’t be with human romantic love because dopamine goes up with a lot of things. It goes up with gambling, chocolate, playing Candy Crush. So it couldn’t possibly be dopamine.

They said, “Well, we know there’s another one that’s involved in bonding; it’s called oxytocin.” Oxytocin goes up with mothers and children, that causes them to bond. So they said, “Let’s take a look at that,” so they looked at that.

They’ve found that when a female finds a man she’s interested in, her oxytocin goes up by 51%, and then if they block it, she loses that loving feeling. 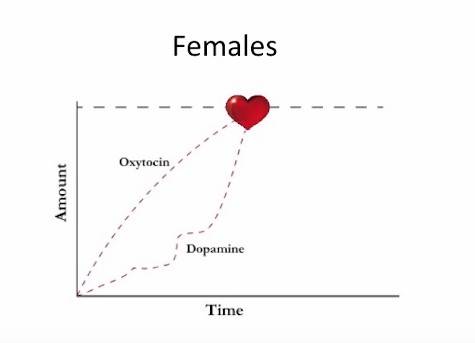 So they said, “Ah, it must be dopamine and oxytocin,” but there was a problem. It can’t be oxytocin for a man, because of testosterone. Testosterone blocks the effects of oxytocin. So they said, “It’s got to be something different.”

They looked at another one that had a similar formula to oxytocin, and that is vasopressin. So they did the study again. The voles would meet. They’d have the vasopressin. They’d inject an antagonist, a chemical block to the vasopressin; he would lose that loving feeling.

They said, “Oh, then it’s got to be dopamine and vasopressin for males, and possibly some testosterone because we know that it goes up.”

So they said, “Ah, perfect.” What does that mean for us? Is this applicable? To find that out, I wrote to one of the Head of Studies at Florida State University, and I asked, “Is the vole study applicable to humans?” His response is a little embarrassing; he wrote back, “Of course, Dawn!”

The exclamation point is his. I didn’t want to write back for further clarification. That was a little embarrassing, so I didn’t have to. Fortunately for me, Tiffany Love, from the University of Michigan, came out publicly, and she said that she believed that the vole studies and human romantic love were similar.

As long as you’re dating and you’re happy, your dopamine is going up. Oxytocin goes up; it’s called the cuddle hormone, or the trust hormone, so when you’re kissing, cuddling, having a good time, oxytocin increases.

And as you’re dating a man and you’re learning to trust him, your oxytocin increases. But there’s a catch. Oxytocin slowly builds up that way, but it skyrockets at orgasm. In other words, my grandmother might have been on to something. Remember what she said? “You girls, jump into bed too quick; you fall in love.”

It was starting to look like the science was panning out from what my grandmother said. So I looked at the other part: how does a man fall in love?

If we look at it, dopamine… If he is having a good time, his dopamine is going up, but how does his vasopressin go up? Vasopressin goes up when a man is sexually stimulated.

So if he’s dating a woman he’s sexually interested in, the vasopressin increases. But here’s the catch: unlike oxytocin, vasopressin drops when he has sex.

But there was one other thing my grandmother said, you remember? “You know a man’s in love with you when he commits.” Could commitment have anything to do with this? To find that out, I found a study from the United States Air Force.

The Air Force followed over 2,000 servicemen for more than a decade taking various tests. One of test that they took was for testosterone. What they found is, when a guy comes in, and he is single, his testosterone is relatively high, but as soon as he gets married, it drops.

Remember what I told you about testosterone? It blocks the effects of oxytocin. Oxytocin is a bonding hormone, so it was kind of looking like it could have something to do with it, but it needed further clarification. Was it marriage? Was it actually commitment? They did a study at Harvard University.

They took married men, single men, and men in committed relationships. They tested their testosterone. This is what they discovered: like the Air Force study, the single men had high testosterone, where the men that were married had lower testosterone.

That confirmed something for me that I’d always suspected, not just that women tend to fall in love with sex and men with commitment, something even more important, and that is: my grandmother is brilliant J

Dawn Maslar, M.S., is a science writer and love biologist. She writes for Muses and Visionaries Magazine in South Florida. Professor Maslar is an adjunct biology professor at NOVA Southeastern University, and Kaplan University. She has taught full-time, as well as, part-time at Broward College and at Keiser University. Maslar is the founder of The Science of Love Foundation a non-profit corporation that provides support and funding to individuals and researchers involved in the scientific study of love.

If you want to learn more visit our additional resources:

Marriage: Who is The One Person You Need to Marry Before Getting Married a Second Time?

Apparently, This Is Why Relationships Are Hard Nowadays – Neurobiological Reflexes